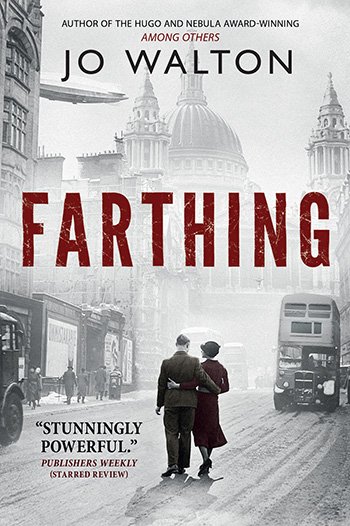 In the alternate history of Farthing, Hitler didn't quite win World War II, but he got the next best thing—complete dominance over Europe and a perpetual war with the Soviet Union, thanks to a peace treaty with Britain championed and brokered by a consortium of war veterans, politicians, and industrialists known as the Farthing Set. On the eve of an important political vote, a member of the Farthing Set—the very man who brokered peace with Germany—is found murdered with a Star of David pinned to his chest. The death throws political plans into question, raises fears of Bolshevism and Jews, and shatters the tranquility of the country estate of Farthing.

Author Jo Walton portrays her world by alternating chapters between two characters and points of view. Odd number chapters are told in first person from the point of view of Lucy Kahn, daughter of the owner of the Farthing estate, a bright young woman who has shamed her family and damaged her social standing by marrying a Jew.
Even number chapters arrive in third person, from the vantage of Scotland Yard inspector Peter Carmichael, who slowly unravels the many layers of the murder mystery and the political intrigue around it.

Farthing is an entertaining whodunit, revealed to the reader through Lucy's suspicions and Carmichael's procedures. How the actual murder occurs is not quite fully explained, but the underlying conspiracy to commit it is both chilling and realistic. And for anyone wondering if all British men are gay, Walton has an answer.

Yes. Yes, they are. Anyone not caught in flagrante is simply assumed by others to be good at keeping secrets.

More interesting than the mystery, however, is Walton's examination of England's class structure and how it relates to the alternate history she's constructed. Lucy's family and friends are far more put out by the arrival of the lower class policemen of Scotland Yard than they are by the corpse in the guest bedroom. Lucy's chapters are full of breezy observations about the shallowness of her social set, while Carmichael provides an outsider's view of the upper crust.

Touching only occasionally on the ongoing war in Europe, the novel's milieu is centered instead on the effect of England's choice to remain out of the war, particularly on the reaction of the country's Jews, whose wish for their government to engage the Nazis leads some to refer to the war in Europe as the "Jew War". As the novel develops, hysterical anti-Semitism and fascism take root and grow together, pulling the country philosophically closer to the very enemy whose advance they'd thwarted at the English Channel. More than just a suspenseful murder mystery, Farthing is an intriguing, well thought-out and believable alternate history.