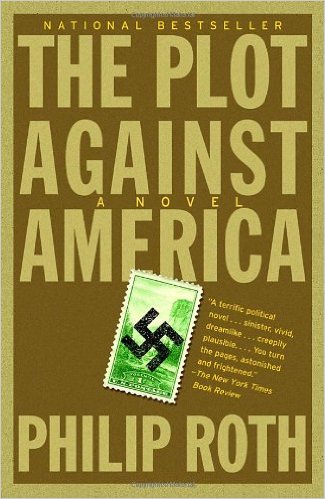 The Plot Against America
by Philip Roth

The Plot Against America
by Philip Roth

In his latest novel, Roth posits the difference in U.S. policy and temperament had aviator Charles Lindbergh entered and won the 1940 presidential election as an isolationist, pro-Germany Republican. Told from the point of view of Roth himself as a 7-year-old living with his family in a predominantly Jewish Newark neighborhood, The Plot Against America powerfully and subtly portrays the creeping paranoia of the Roth family and their neighbors, as well as the latent anti-semitism boiling just beneath the surface of the American psyche.

Jewish reaction to Lindbergh’s association with Adolf Hitler and his administration’s subsequent attempts to dismantle and disperse Jewish neighborhoods run the gamut from the conspiracy-minded paranoia of the working classes to the patriotic buy-in of upper class assimilationists. Roth’s mother, raised in a non-Jewish neighborhood, has lived with anti-semitism and fears its affects on her children. Roth’s Pro-Roosevelt father never wavers in his patriotism, nor in his belief in the American promise of equality for all, not even when his family faces real physical danger. Roth’s older brother, Sandy, at thirteen just beginning to form his own adult opinions and identity, challenges his parents’ fear of Lindbergh and falls under the sway of an aunt working for the United States Office of American Absorbtion. Philip himself is too young to know who is right or wrong, only that the seams of his family unit are tearing, perhaps irrevocably.

If sometimes events seem to move a little too quickly, it’s good to remember that in other countries, too, a broad citizenry adopted fascism as the latest fashion after the toppling of only a few simple dominoes. To be sure, America falls not as far as Germany, but Lindbergh’s attempts to kill Jewish culture with kindness are eerily believable. The only disjointed pacing occurs near the end, where Roth clears the terrifying political terrain with a broad sweep of his hand, a roller-coaster upheaval that doesn’t ring true.

That point aside, the novel is a stunning achievement. Roth’s narration is strong and honest, and avoids the cutesiness and self-congratulation writers risk when they insert themselves into their own fictional environment. His outlook is by turns puzzled, optimistic, fearful, selfish, manipulative, defeated, and ultimately skewed by adults, as any child’s would be. Through his eyes, we see an America not too distant and not too different from our own, an American that very well could have been.