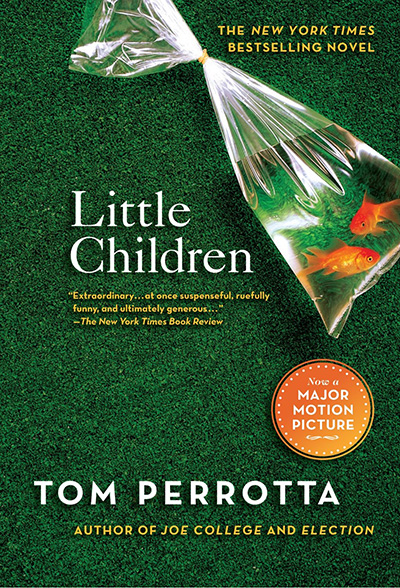 Tom Perrotta's Little Children is perhaps better known for the Academy Award-nominated film version, which faithfully captured the awkward humor and brutal honesty of this tale of suburban thirty-somethings, each of whom get their turn to ask the very sensible question, "How the Hell did I end up like this?"

While taking aim at the tedium and hypocrisies of suburban life, Little Children has at its core a sense of romance, of fantasy and possibility. In Todd, Sarah finds the handsome, athletic, attentive boyfriend she'd always dreamed about, but she also yearns for her own identity—the literate, engaging, funny, outgoing person she feels trapped inside herself and within her failing marriage. Todd's attempt to recapture his youth leads him back to the football field and to Sarah, the starry-eyed girl who worships his beauty and thrills to his amateur athletic triumphs, in ways which his beautiful, successful wife cannot.

It would be wrong to pigeonhole Little Children as merely a novel of adultery or a satire of suburban living. The novel is viciously, painfully funny in parts, but Perrotta also evinces a great deal of empathy for his characters' longings. Even the convicted pedophile, recently released from prison and now the target of a self-appointed neighborhood watch, elicits a little sympathy, even as he haunts the neighborhood swimming pool and bullies his unwitting dates.

Perrotta's harshest barbs are flung at the suburban mothers who, despite their age and supposed maturity, band together like a batch of nasty high school girls, complete with a ringleader who keeps them in line with veiled threats and judgments. While Sarah and Todd long for their youth, these women wallow in the worst aspects of it, and thereby contribute much of the cruel humor of the novel.

In the end, however, even the bitchiest character gets a chance to show another side of herself, as Perrotta gives his entire cast a bit of triumph and a bit of human failing, all in service to a superior novel with a witty, candid, and ultimately affectionate view of the trials and disappointments of adulthood.