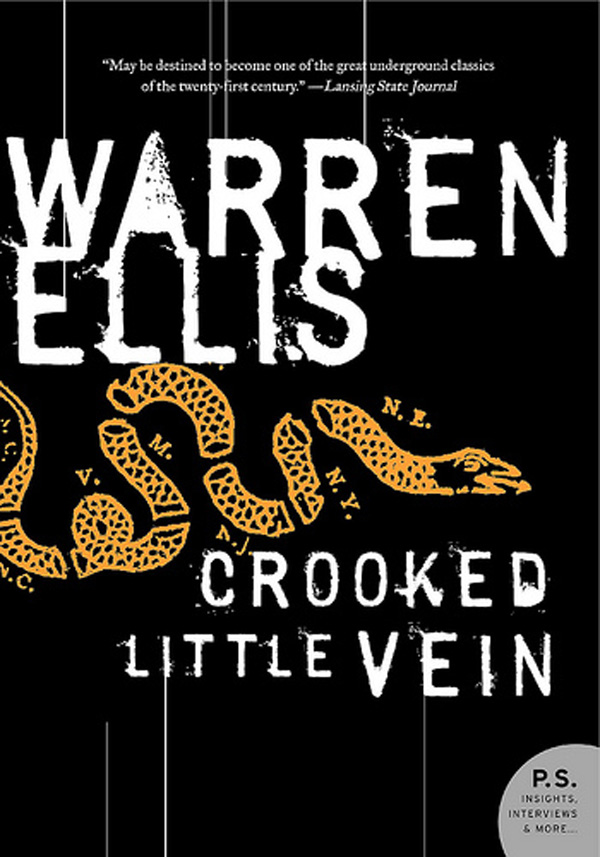 In his first prose novel, Warren Ellis—best known as the writer/creator of comics series The Authority, Transmetropolitan, Trees, and numerous others—delivers a fast-paced mystery-fantasy packed with enough profanity and transgressive sex acts for five books, a brisk read that dances cleverly on the line between aroused curiosity and crass voyeurism.

Michael McGill, a private detective and self-proclaimed shit magnet—his most recent job ended with his discovery of an ostrich-raping tantric sex cult—accepts an assignment from a top U.S. government official that could set him up financially for the rest of his life. The heroin-addicted U.S. Chief of Staff hires Mike to track down the 2nd Secret Constitution of the United States, complete with the 23 Invisible Amendments the founding fathers really intended to use to govern the country.

Like any good seedy pulp detective set-up, the assignment comes with a catch. The Secret Constitution has the mystical power to cloud minds—or at least influence sensibilities—which the current administration plans to use on its own citizens. By the time the Constitution has finished its cross-country tour, America's libidinal clock will be set back to Eisenhauer Standard Time.

McGill follows the trail of the missing Constitution in the company of his new girlfriend, Trix, a free-loving free spirit who lends Mike her optimism and sense of adventure. She keeps Mike from giving up, from selling out, and from missing out on the temporary enjoyment of a set of elephantine, saline-supplemented cojones. Together, they discover that the priceless document has been traded among groups of sexual deviants, a trail they follow from one to the next like the world's filthiest connect-the-dots puzzle, creating the crooked little vein of the title.

Ellis's writing is crisp and fast-paced. He smartly compresses some details other writers would have obsessed over, sprinkling the novel with a few chapters that are no longer than a paragraph or even a sentence. The forward motion rarely stops, or even pauses. The plot is straightforward enough, driven by the path of the document, which has left an amazingly thorough paper trail for Mike and Trix to follow. What the plot lacks in complexity, however, is more than made up in the details of the sexual perversion Mike and Trix find at each stopping point.

As they track the Constitution from one group of eccentrics to the next, the peccadilloes they discover become increasingly outlandish, and Ellis clearly enjoys describing them. His writing rolls in sexual deviance like a dog on a dead bird. Taken sequentially, the parade of smut and depravity almost becomes unreal, yet individually, each scene is perfectly believable to anyone who's spent even a little bit of time trolling the seamier areas of the web.

For those who lived through the ugly culture wars of the 1980's and early 90's, Crooked Little Vein might seem a little dated—in the real world, the government has graduated far beyond caring who we sleep with; they want to control everything—but the end message is still a raucous affirmation of our freedom to be as strange and filthy as we want to be. At its most subversive, it's an encouraging nudge towards becoming stranger and filthier than we ever dreamed.