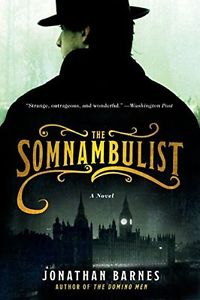 The Somnambulist
by Jonathan Barnes

The Somnambulist
by Jonathan Barnes

Readers who enjoy humor with their fantasy, and especially those who appreciate Victoriana and the occult, may find a new addition to their library in The Somnambulist, a novel by Jonathan Barnes, who makes his debut. Billed as a parody of the penny dreadful, The Somnambulist is an enjoyable romp, filled with Neil Gaiman-like eccentrics and weird tidbits, a light tone, and just enough mystery and suspense to keep the reader's attention through the last page.

Barnes' protagonist is Edward Moon, a stage magician near the end of his career in England at the turn of the last century. His stage assistant and roommate is an eight-foot tall, mute, completely hairless, and apparently invulnerable being known as the Somnambulist. Together, they perform Moon's act to slowly dwindling audiences, while Moon's fame as a detective of the weird also fades, as the public forgets his efforts solving strange crimes that baffled the police.

Nearing retirement but not resigned to it, Moon is called upon by the police one more time to solve a series of bizarre murders occurring about London. During the course of his investigation, he stumbles upon a vast conspiracy intended to bring down the entire city, at the center of which is a secretive cult known as Love, Love, Love, and Love.

Moon and the Somnambulist are surrounded by a bizarre yet affecting cast of oddities, including a brothel full of sideshow freaks employed as hookers; Moon's former assistant, now an asylum inmate known as Barrabus; an amoral albino government agent with a penchant for setting fire to the homes of those who don't cooperate with his investigations; and a mysterious ally who seems to be moving backward through time as Moon and the others move forward.

Barnes' writing is very good, with strong descriptions and clever turns of phrase. He employs a first-person narrator, an unknown and omniscient observer whose identity is unknown until the end of the novel. His omniscient and insulting view of the main characters (and the reader) keeps the narrative flowing with only occasional breaks in the plot for his abusive observations.

Because of the narrator, however, the reader does not get to know the main characters with any intimacy, and though the novel is a page-turner, that has more to do with the quality of the writing and the unfolding mystery, as opposed to any real affection for the characters. For example, the Somnambulist communicates only through writing, while the narrator—and thus the reader—is never privy to his thoughts or any knowledge of his background. As a result, he doesn't garner the emotional investment he might otherwise. He's a mystery that is never solved.

Though perhaps a bit too inscrutable—in addition to the narrative distance from the main characters, there are a number of questions left unanswered by the end of the book—The Somnambulist is nonetheless cleverly written and an enjoyable read, with plenty of moments that elicit laughs, shivers, and sometimes both at the same time. It's well worth an afternoon or two.