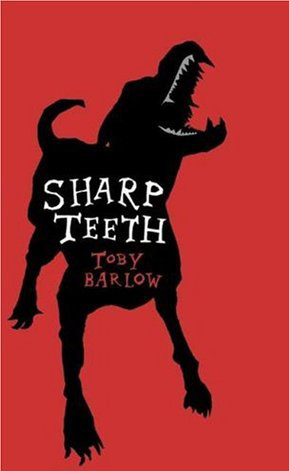 Let's sing about the man there
at the breakfast table
brown skin, thin features, white T,
his olive hand making endless circles
in the classifieds
"wanted" "wanted" "wanted"
small jobs little money
but you have to start somewhere.

With an opening line clearly urging his readers to consider their favorite epic poem, Toby Barlow raises the curtain on his powerful, compelling novel, Sharp Teeth.

Anthony, the temporarily down-on-his-luck protagonist, finds employment with the Los Angeles animal control department, where he is faced with the sad and gruesome task of capturing and putting down strays. His co-workers are rough around the edges and more than a little mysterious. When they begin disappearing, Anthony has no idea he is about to be drawn into an eerie underworld of secret societies, dog fights, drug deals gone awry, and werewolves. Lots and lots of werewolves.

For his first novel, Barlow set two very high goals. First, he dared try to bring a fresh view to the worn-out werewolf myth. Second, he decided to write it in free verse. Happily, he nails it, on both counts.

Some of us have problems.
They still talk about Bone and what the grease does to him.
He can't go into fried chicken places
the smell, the scent, turns his blood right away.
They say he took out a Popeye's once.

In addition to his unorthodox method of story-telling, Barlow adds layers of complexity to lycanthropy, applying the rules of the pack to the wolves' human counterparts—street gangs, communes, and corporate raiders. These werewolves don't need to wait for a full moon to complete the change. They control their metamorphoses—or don't —at will.

Like both wolves and humans, the packs vie amongst themselves for dominance. One large group is based on a philosophy of self-control and careful planning. For them, becoming wolf is a reward, a release, as they work their carefully crafted plot to dominate the human world. Other groups are less circumspect. They revel in their power, and enjoy a show of force. Though taking different paths, each of the groups has plans for dominating Los Angeles, and for taking revenge on those who harmed their kin.

Barlow's skill with language immediately draws the reader into the novel, regardless of how his lines are formatted. His writing is lyrical, yet sharp, dense with richly detailed scenes that nonetheless keep the tension high and the pace fast. His verses reward multiple line readings, and yet—somehow—this doesn't slow the thrust of the novel. Sharp Teeth is at once meaty and swift and incredibly satisfying.