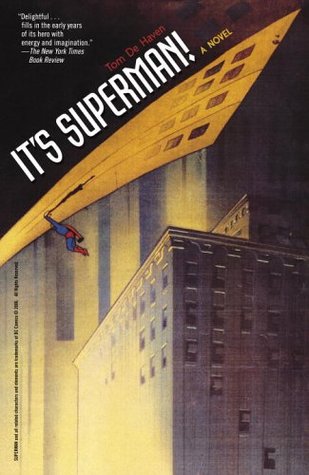 It's Superman
by Tom DeHaven

Like eight seasons of Smallville—only with much better writing—It’s Superman condenses the early years and first super-adventure of the Man of Steel into a well-crafted and entertaining novel. Writer Tom De Haven takes a retroactive addition to the character’s mythos—his Kansas upbringing—and smartly plants it square in the middle of the Depression-era Midwest. One half-expects Tom Joad to roll by in a dilapidated pickup truck before Clark Kent makes his way to New York City and his blue-and-red destiny.

Though Superman was created by two Jewish kids in a big city, their quest for truth, justice and the American way finds sympathetic avatars in De Haven’s Kent family, as they experience poverty, bad luck, and injustice in rural America. De Haven captures Clark’s yearning for justice for the common man and his parents’ salt-of-the-earth morals, defining him as perhaps a bit unworldly but far from naïve. In his earliest adventures, Superman was as likely to clobber a wife beater or toss a crooked landlord into a wall as he was to fight giant robots or brain-swapping mad scientists, and it’s nice to see that attitude displayed here.

Splitting his narrative between Smallville and New York City, De Haven introduces Lois Lane, imagining her perfectly as the only type of woman who could have managed to survive on her own in a bustling metropolis and pushed her way into the man’s world of a major city newspaper. She’s smart, strong-willed, independent, stubborn, sexually uninhibited, and not at all a typical woman of the era.

De Haven also gives his villains equal time. Though the world he depicts may have been simpler, he populates it with the kind of violent mobster and stick up men who stormed the plains in the 1930s. Superman’s familiar antagonist, Lex Luthor, is an interesting amalgam of his various incarnations. He’s both the modern businessman/politician and the classic evil scientist of the comics. His mad scheme is exactly the kind of plot that hybrid Luthor would undertake, an exciting combination of political machination and Saturday matinee serial movie villainy.

With strong details, interesting characters, and snappy interactions, It’s Superman deftly recalls other signposts of its era, including pulp fiction, cliffhanger movie serials and the Fleischer studio Superman cartoons. De Haven clearly had a good time showing how his hero came into the world as the champion of the little guy, long before he became the famous corporate symbol of the status quo.