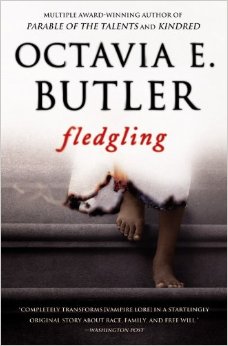 In her last completed novel, Octavia Butler bequeathed a great gift to readers of fantastic fiction : a new twist on the vampire myth, free of old clichés (coffins and European accents) and new (frilly-shirt wearing twits and sexy female slayers). As with her previous novels, Butler turns out an exciting, enthralling story while using the unique trappings of genre to explore real-life concerns of race, identity, and sexual relationships.

In a unique re-imagining, Butler casts her vampires as a separate species of humanoids, a distinct and ancient race whose relationship to humans is biological and symbiotic, as opposed to magical or infernal. Butler keeps the characteristics that make sense—sensitivity to sunlight, the mutual addiction between vampires and their humans—while discarding those that don't—the inability to cast a reflection, aversion to religious symbols.

The titular fledgling is Shori, a young girl who awakes alone in the woods, badly burned and with no memory of who or what she is. As she heals and gathers a family of humans, Shori slowly discovers her non-human nature and delves into the mystery of how she became injured. Her investigation leads her to the larger community of vampires where more murders are committed and racial hatreds are revealed.

The vampires of Fledgling are a proud, yet insular race known as the Ina. They are a fully imagined culture, with their own history, mores, and judicial system, wholly separate from humanity, yet also dependent on it for survival. The Ina need human blood to live. In turn, humans aren't converted to vampirism, but do become addicted to the venom in the Ina bite. The result is a series of life-long relationships based on mutual need. For some of the Ina, humans are beloved family members, but for others, they are barely more than livestock. Ina religion and creation myths allow some to justify their racial hatred of humans, which ironically gives them more in common with humans than they'd likely admit. Butler's biological view of vampirism a fascinating reinterpretation, almost obvious in retrospect, and one realized with thoroughness and complexity.

Butler uses the relationship between Ina and their humans to explore racial issues, and also introduces differences among the Ina to explore schisms within their own culture. She also explores sexual dynamics via Shori's relationships with her human symbionts. Nearly immortal, Shori physically resembles a pre-adolescent girl, though her actual age is fifty-three. When she invites various humans to join her in a family unit, they also enter into a sexual relationship with her and potentially with each other. In portraying this polyandry, Butler turns sexual politics on its head and clearly plays with the idea of sex as power. By her physical appearance, Shori seems younger, weaker, and debilitated, but in fact, she is the aggressor. Once she gives her first bite, she is also in control of her human. It's powerful, thought-provoking, and not for the prudish.

Combining aspects of horror novels, murder mysteries, and courtroom thrillers, Fledgling is no mere potboiler, though it is a gripping page-turner. Like all of Butler’s work, her final novel examines the effect of race, age, sex, and class on a person’s standing in their culture. The society is entirely fictional, but the questions raised are no less serious for it. Smart, taut, and suspenseful, Fledgling is a wonderful—and untimely—coda to a brilliant woman’s career.