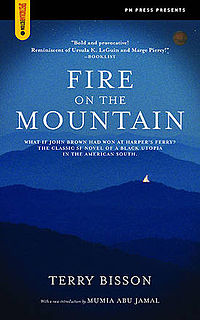 Starting with a simple twist to American history—What if John Brown's raid on Harper's Ferry had succeeded? What if Harriet Tubman had led Brown's army to victory and inspired revolution among Southern slaves?—Terry Bisson's Fire on the Mountain travels 100 years of alternate history to examine a world in which the Civil War is known as the Independence War, and the American south has become the distinct nation of Nova Africa. Bisson's narrative slides between 1859, following the nascent abolitionist movement and the seeds of rebellion, and 1959, where we see the results of that rebellion, a socialist nation filled with scientific advances and wonders.

In 1959, Nova Africa celebrates its centennial and watches as her astronauts land on Mars, a full decade before the real America reached the moon. Archaeologist Yasmin Odinga, whose husband died on an earlier space flight, travels to a museum in Harper's Ferry to donate her great-grandfather's journal, which details his involvement in John Brown's rebellion. In addition to watching the Mars landing with her mother-in-law and daughter, Yasmin must inform her family that she is pregnant. Interspersed with the tale of Yasmin's travels are entries from her great-grandfather's journal, which describes his evolution from a naive, teenage slave to a fighter in John Brown's army to a successful practicing doctor.

Bisson's writing is solid and evocative, and creates a strong sense of place to bring the reader squarely into this new world. Similarly, his characters are exquisitely detailed and complex. Yasmin is conflicted about watching the Mars landing with her mother-in-law, hesitant to relive the death of her husband but unwilling to allow his mother to experience this historic event alone. Yasmin's daughter Harriet is independent and headstrong, while still requiring a loving attachment to her mother and connection to her deceased father.

The Harper's Ferry Museum was filled with dead things. Rifles that hadn't been fired in a hundred years, and would never be fired again; wool coats with bullet holes in them, one with blood splashed all over the collar. Swords, spears, pistols, knives. Harriet was sick of history. First a famous father, now a famous great-grandfather. Great-great. There was no room for real life. Her famous father crowded out the real father she loved remembering. Her mother spent her time digging up bones.

Unlike many novels that examine race and American slavery, Fire on the Mountain doesn't posit a dystopian future where minorities remain downtrodden or create an allegory in which slaves remain enslaved. Instead, Bisson starts with the premise of black empowerment to create a black-majority, scientifically advanced, socialist utopia, founded by people who were not given freedom, but fought for it, both during Brown's rebellion and later, to protect their new territorial boundaries. In this alternative history, Brown and Tubman are revered as the founders of a new nation, and Abraham Lincoln is a hated figure who launched a war to bring the freed slaves and their territory back under the control of the United States. Cleverly, within the narrative, a spec-fic novel examining American history had John Brown's rebellion failed tracks exactly with our nation's actual history and is considered a dystopian nightmare. While Nova Africa is thriving economically, socially, and scientifically, the United States—now known as the USSA—had a more difficult time adjusting to a new reality without its Southern states and slave workers, and a century later continues to feel the economic repurcussions. Bisson also hints at continued violence in America and a second Revolutionary War.

Fire on the Mountain is a masterful work of science and speculative fiction, and a classic of modern American progressive literature. For readers looking for speculative fiction that examines social change as much as politics and science, this is a worthy read. For anyone who admires fiction that tackles racial issues and imagines a better world than ours, this one is a must.