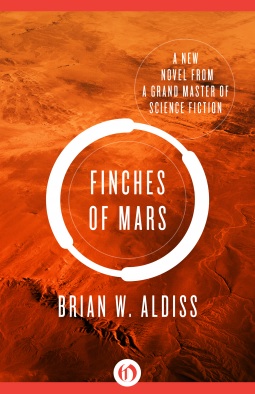 In the not too distant future, groups of Earth émigrés have built a new civilization on the sands of Mars. To ensure these new communities will not suffer the same ills that caused these communities to leave Earth – factionalism, religious wars, environmental waste and destruction – only the best and brightest from among the world’s intellectuals are allowed to travel to the red planet, and only atheists and the relatively young need apply. Art, too, is seen as a corrupting influence, and is shunned.

Towers are built for six communities—representing the Western nations, China, South America, Asia, Scandinavia, and Russia/Eastern Europe—but political fractions and divisiveness are avoided until the colonies face the prospect of their extinction. The reason? No child has been born on Mars. Most babies arrive stillborn, and those few born alive are so gravely ill they live no longer than a day.

At the core of Finches of Mars are ideas that could carry a novel warning of the risks of war and political intransigence. Or a tale of how humanity’s poor stewardship of the environment means little in the long game of nature. Or a satire of smarter-than-thou intellectuals who believe they can run a world far better than their inferiors. Or a farce which takes as its premise that civilization is fucked no matter what we do.

It’s hard to tell which.

At moments, Finches of Mars is each of those, but ultimately none of them, because there’s no consistency in the tone or narrative. Rambling and disjointed, the novel follows a group of characters, most of whom reside on Mars, but not in a linear way and often without any connective tissue binding their scenes together. The characters speak in odd declarative sentences, and even in conversation only sometimes sound as though they are speaking to each other. The rest of the time, they sound like they are reading statements off propaganda posters.

With characters named Tad Tadl and Ida Precious, it’s hard to take the novel seriously as a cautionary environmental or political tale, but the occasional glimmers of humor aren’t enough to guide the book into decent satire.

In all, the novel reads like a compilation of random thoughts or notes for a number of stories Aldiss hadn’t – and might not have – the time to write, but which he wanted to convey nonetheless. Like an album of alternate takes or snippets of rehearsal footage, it might be best enjoyed by completists. For the casual reader or one new to Aldiss, a different starting point may be in order, but for the serious fan, Finches of Mars may provide the last chance to see what’s on a beloved writer’s mind as he enters his twilight.